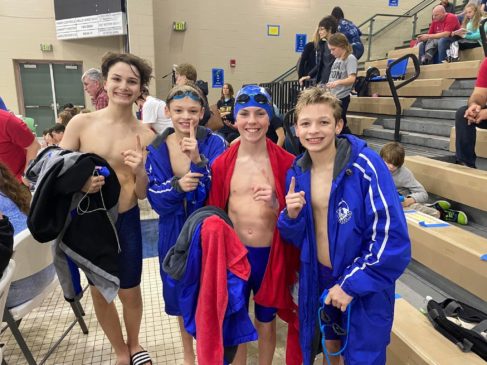 The Dubuque Dolphins Swim Team shined at the YMCA State Swim Meet in Marshalltown, on March 5 and 6, 2022

Bringing home two gold medals for the girls, seven-year-old Clara Fry in the 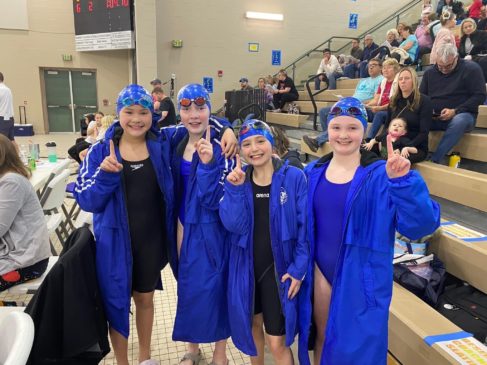 Seventeen-year-old Aiden Yaklich earned an individual title in the 50 fly (23.95), which is a new Iowa State Record and new team record for the Dubuque Dolphins, previously held by Gavin Hall (24.66) 2019.

Other medal winners from the state meet were:

8 and Under Girls: Clara Fry earned bronze in the 25 butterfly.

8 and Under Boys: Emmett Jedlicka earned silver in the 25 free.

11-12 Girls Elyse Cloos earned silver in the 200 freestyle. Rebecca Roling was third in the 100 freestyle.

Other top eight finishers for the Dolphins were:

Jacob Godel placed fifth in the 200 free and eighth in the 50 free.

A female and male Dubuque Dolphins were honored at the state meet. The Iowa YMCA Competitive Swimming All-Star team members were Taylor Weig, 17-year-old, daughter, of Heather and Donny Weig. 17-year-old Brady Noel, son of Victoria Noel and Matt Noel. Both Taylor and Brady have shown dedication, excellent sportsmanship, and improvement in the sport of swimming, the best qualities of a Y swimmer.

The Dubuque Dolphins will be sending 45 swimmers to the North Central YMCA Regional Meet at the Wellmark YMCA, March 18 – 20.